My wife got a very weird call on her cell phone last week.  For starters, the call came at an ungodly 5:45 a.m.  Secondly, the caller was one of my poker buddies.  And lastly, the call went straight to voicemail (Karen turns off her ringer at night) but he left no message.  None.

And why did he call KAREN?  Why didn’t he call ME?  After all, he’s supposedly MY friend.  So, unless he’s planning a surprise party to congratulate me for being a vastly superior card player to him, this pre-dawn inter-spouse cell phone call was an egregious violation of “Guy Code”.

When confronted with these questions, my friend said that he didn’t actually call Karen.  He said that for the last couple of days, his so-called “smart” phone had been making unauthorized phone calls to 5 random folks on his contact list whenever his morning alarm went off.  To make matters worse, the phone would subsequently hang up as soon as the connection was made.

The way he described it to me, his phone was “cursed and possessed by the devil, and needed to be exorcized”.  I told him that I didn’t do exorcisms - but even if I did, I didn’t think that there was anything demonic about this.

In fact, I thought it was rather divine.

I mean, do you think it would be a blessing or a curse if you started each day by randomly calling 5 people on your contact list – FOR NO REASON AT ALL?  Just because.  No hidden agenda.  No ulterior motive.  No purpose, other than to simply connect with them.  Person to person.

Do you think the folks on the receiving end of such a call from you would consider that a blessing, or would they curse you?

Consider the preparation that you'd likely make prior to each one of those calls. Granted, you’re calling “just to say hi”, but you’d probably spend a moment or two beforehand thinking about them and what might be going on in their life.

Is their dog still sick?  Has their only child just left the nest for college?  How’s their favorite football team looking for the upcoming season?  Is their boss still a jerk?

You know, I used to do something similar to this back when I was the pastor of a local church.  Each Monday morning, I’d put the names of 5 persons/families on my desk blotter.  I made it my goal that, by the end of the week, I would call each and every one of those folks “just to say hi”.

As you can imagine, the responses I received to these random phone calls varied wildly.  Sometimes, the recipient would spend the entire conversation wondering why I really called, waiting for the other shoe to drop.

But much more often, the folks would say something like “It’s funny that you called, Pastor…”,  and then share with me an important issue that they had been hesitant to talk to me about because either I seemed too busy or they were too afraid/embarrassed.

Alas, I’ve gotten away from this practice since becoming a DS, reasoning that the context for my ministry is so different now.  But honestly, ministry is ministry, and people are people.

O me of little faith

There’s a barber shop on my way to work.  It’s not a beauty shop or a hair salon or a coiffuring center.  It’s just a good ole fashioned barber shop, with a swirling red, white and blue barber pole out front.

For the past 7 years, I have driven by this place – but I’ve never walked inside.  I’ve thought about it, though.  Actually, I’ve fantasized about it.

Perhaps I should explain.

It’s not the prospect of having of my ever-thinning and ever-graying hair cut that draws me to this place.  I already have someone who lops my locks every couple of months, with whom I am well pleased.

No. What draws me to this particular barber’s shop is the large sign in his window that advertises a $20 shave.  Admittedly, that’s a lot of money to pay to have one’s face shaved – especially when one has his own electric razor at home that’ll do the job for free.  But ever since I was a little shaver, I have longed to sit in a swivel chair, draped in an apron, lathered to the limits, and have a guy use a straight razor to give me a nice warm, close shave.

Unfortunately, I’ve never been able to justify such a luxurious and self-indulgent extravagance.  If only it was a little less expensive.

Ah, watch what you ask for, beloved.

Last month, I attended a  5-day church conference at the Marriott in Lancaster, PA. During a brief break from our business, I took a short stroll.  A few blocks from my hotel, at the corner of King and Prince Streets, I spied a sandwich-board sign with a painted picture of a red, white and blue barber pole and the promise of a $3 haircut! 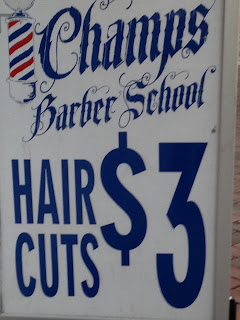 Upon closer inspection, however, I noticed that this place wasn’t a barber shop but a barber school. In other words, they didn’t want customers - they wanted guinea pigs.

Inside the barber school, hanging on the wall, was a more complete price list of the various services the students offered. The one that caught my eye was the $3 shave.

My first (second and third) reaction was to dismiss that possibility as quickly as I dismissed the $3 haircut.  After all, what kind of person would literally stick their neck out to allow a nervous neophyte to put a straight razor anywhere near their jugular vein just to save a few bucks?

To be honest, I don’t have faith…
…that ISIS is going to stop terrorizing the civilized world in the foreseeable future;
…that our country will solve its racial divide so that we can finally live in harmony and unity, as God intended;
…that we’re going to suddenly stop mortgaging our children’s fragile future with our  local, state and national budget deficits.

Then again, I didn’t have faith that I would ever see…
…the end to Apartheid in South Africa;
…the collapse of the Soviet Union and the destruction           of the Berlin Wall;
…a black man living in the White House, and a woman being nominated by one of the major political parties for the presidency.

Soooo, maybe the next time the Big Bad Wolf of doubt and fear threatens to enter my house of faith, I will, with the confidence of Christ, proclaim, “Not by the hair of my chinny chin chin.”